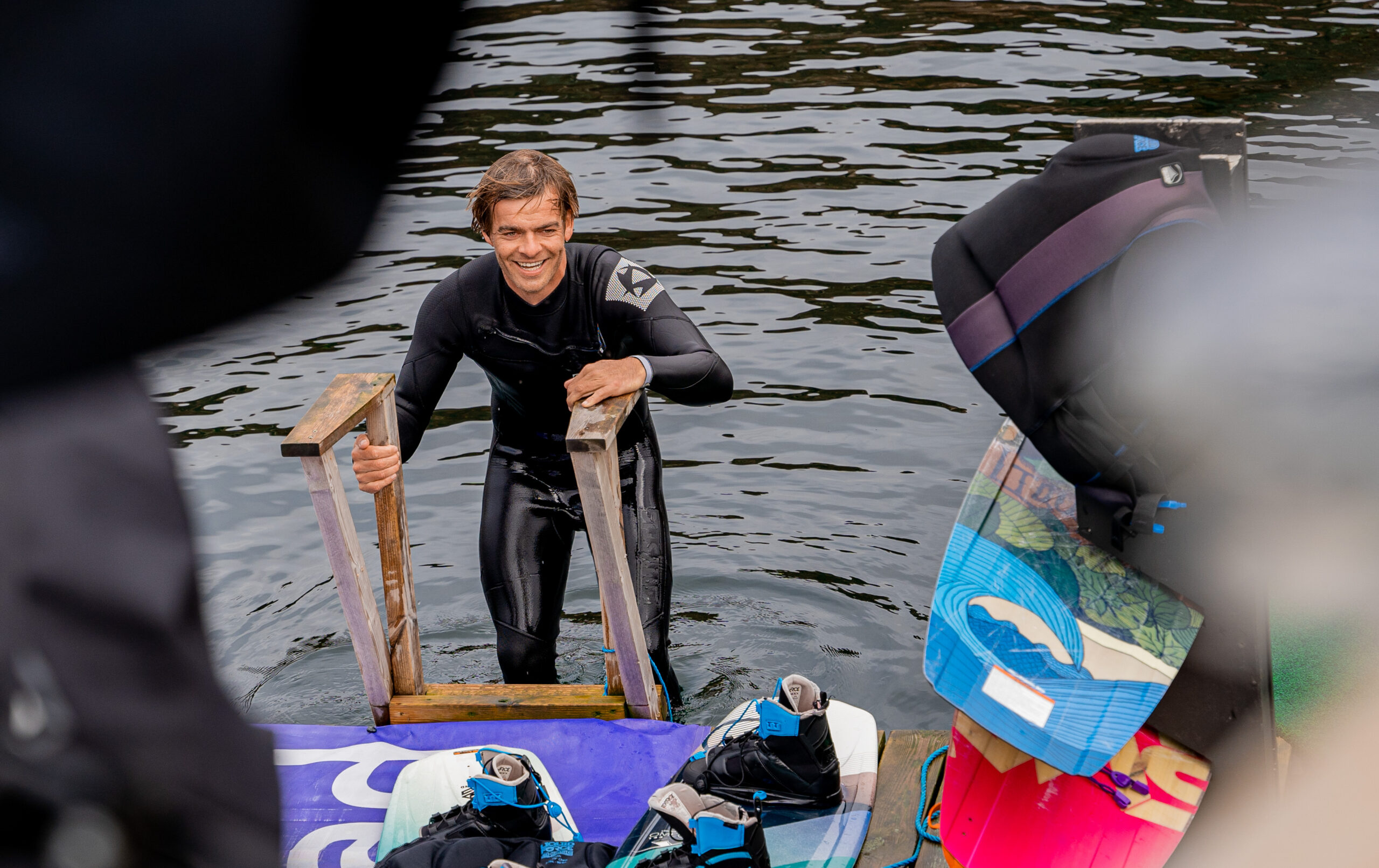 You might know him from some nerve-racking jumps off of cranes and the Dubai hotel Burj al-Arab. But there is a lot more to Nick Jacobsen than crazy stunts on Youtube. Kitekalle met up with him in Halmstad to talk about his kitesurfing career so far. And of course, for some foiling in the wake park.

First off it might be appropriate to mention that I’m not a kitesurfer and prior to this conversation I had only heard about the famous Nick Jacobsen from my colleagues during this summer working at Kitekalle. I of course made a great deal of research, including a lot of Youtube watching and talking to other kitesurfers about his “crazy jumps” and how “really awesome” he is. I must admit that I expected to meet a person who was all about the adrenaline always aiming for higher jumps. And that is partly true, Nick is really brave, or crazy if you want, and of course the search for new challenges is a part of it. And he is really awesome and a super skilled surfer, but he is also a real humble, hard-working guy with a lot of ambition and passion for his sport.
– I’m driven by the adrenaline to a certain extent. But it’s the fun of it that drives me the most. And of course, the pursuit of doing something that no one else has done before. I’m addicted to the freedom and fun that comes with sport, he says.

At this point Nick can look back at a seventeen yearlong kitesurfing career, but that does not mean it’s time to step down. He still has some more boundaries to push.
– I’ve always thought that 35 is a great age to sit down and reflect and now I’m 33 so it’s getting closer. But first I have two really exciting projects to finish. I can’t really tell you much about them but one of them includes parachuting, which I never done before. I called some professionals to teach me. And from zero experience I’ve now done about 150 solo jumps. It’s against all common sense to jump out of a plane, but now it’s my new normal.

”I had a long conversation with my mother one night and she was really supportive. She saw that I really liked the sport and said: “You seem to have the talent for it, see how far you can take it!”

Nick seems to be a fast learner and kitesurfing is no exception. It all started when he was 16 years old. He took a year off from school to do something else. And that something else ended up being a lot of kitesurfing. In Cape Town where his dad lived.
– My dad was a windsurfer and at some point, he and all his friends converted to kitesurfing. At that time kitesurfing was a bit different from now. The instructor gave me a kite, told me to control it and not to loop it. That was it. Despite the few instructions it went well, and I got up on the board after two weeks. And for about four months I kited every day.

The year off was coming to an end and Nick went back to Denmark to start high school. But a call from a brand and his very supportive mother changed his plans.
– I got offered a lot off free stuff and that was a big deal for a seventeen-year-old at that time. I had a long conversation with my mother one night and she was really supportive. She saw that I really liked the sport and said: “You seem to have the talent for it, see how far you can take it!”

Said and done. Nick never even started high school, instead the thought of living off his passion started to form in the back of his head.
– It was springtime in Denmark, and I had committed to see how far I could take it. I took a job as a dishwasher and bought a car for the money I saved. I drove around in Denmark, Sweden and Germany, kitesurfing and living in my car. My dad bought my first kites but then it all got bigger and bigger and all of a sudden, I got my first sponsorship. And then it carried on.

I”’m never scared with the kite. But when I was doing a test run for the stunt in Dubai I was shaking and sweating like crazy.”

When Nick started, kitesurfing on a professional level was very new, there were not a lot of pros with big sponsors or Youtube videos where you could watch kitesurfers doing jumps and stuff. But Nick had set his course and the only way was up, literally.
– I was determined to work. The more work you put in the more it gives in the other end. Of course, I travelled and enjoyed the kitesurfing life, but I also knew that I was there to train. I have always respected my mother’s decision to support me and wanted to honor that. It came natural to me to work for it, but I have always been driven by fun. I love water and flying, and to be in the air and control it. That really got me hooked in the beginning. But mostly it’s about fun and passion. If you lose the passion you lose yourself.

One might think that the adrenaline part would be included in what drives Nick. But he is surprisingly, and funny enough, down to earth when it comes to the crazy, breathtaking stunts he’s done.
– To a certain extent adrenaline drives me, but I’m very reflective of that. When it comes to the stunts I do it’s more the pursuit of doing something that no one else done before. It’s a great way to learn more about yourself. It’s a process you go through where you make yourself do stuff you never have done. I plan, learn the theory, train and all of a sudden that thing is normal. It´s a really fascinating process. I like to push the limit of what’s “normal” and to not rely on anyone else. And also, the fun of it, of course. This process of taking something I never have done and turning it into something normal is something I apply to my daily life. It makes me a very happy person. I have obstacles, but I have learned a lot from these experiences that I can use daily to overcome them.

Are you never scared?
– I’m never scared with the kite. But when I was doing a test run for the stunt in Dubai I was shaking and sweating like crazy. It was so high up! But as soon as I launch the kite on the actual day, I’m totally chill. I actually had a heart rate monitor on me and before the stunt my heart was pumping really fast but when I stood there, on the edge of the hotel, ready to jump my heart rate was lower than when I’m resting. That is really interesting. I had one thing in focus and that was safety. So, whenever I’m about to try something new and feel stressed, I know I need to get back to planning and that it’s not the right time to do it just yet.

When your mother said “see how far you can take it” I guess she didn’t have jumping from Burj al-Arab in mind. Is she still supportive of you?
– Haha, yes. My family trusts me and my instinct. But my mother only wants to hear about the stunts when it’s done.

You also engage in the more material part of the sport. You were recently involved in starting up the new North brand, how come?
– It was a great opportunity to build something from the ground. And it got big really quick. I started out as a team manager but realized that I needed more time on the water, so I stepped down. It was great, but maybe later on. I’m still in the team but now doing more of what I do best: surf.

”I have two exciting projects coming up, the first one in Jordan in November. Apart from that I want to give back to the kitesurfing community.”

And then there was your own competition, the Cold Hawaii games in Klitmøller. Was it a one-time thing or will it come back next year?
– Yes, that was a really fun experience. We needed some action in the kite world, it was so empty and not much at all going on due to covid-19. The idea came late in June, so we had to do a lot of stuff in a short time. But I called a few people and it was clear that we all wanted for something to happen so all of a sudden, I had sponsors and could invite a lot of professional kitesurfers. I’m very happy with the event and we will definitely do it again next year.

So, is it time for Nick Jacobsen to sit down and reflect over his career? Well, maybe not just yet.
– I have two exciting projects coming up, the first one in Jordan in November. Apart from that I want to give back to the kitesurfing community. It’s so great and I really admire it. I want to contribute with what I can and educate the up and coming youth. We often session together in Denmark and talk about how to appreciate what they have. I aim to help the new generation to use their potential and turn it into something great. As I mentioned before, the more work you put in the more you get. And I want to keep working. It was never my goal to earn money, I’m just a kid who wants to surf. 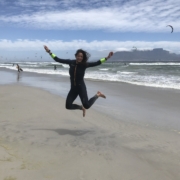 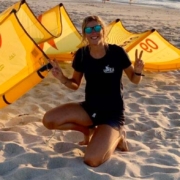